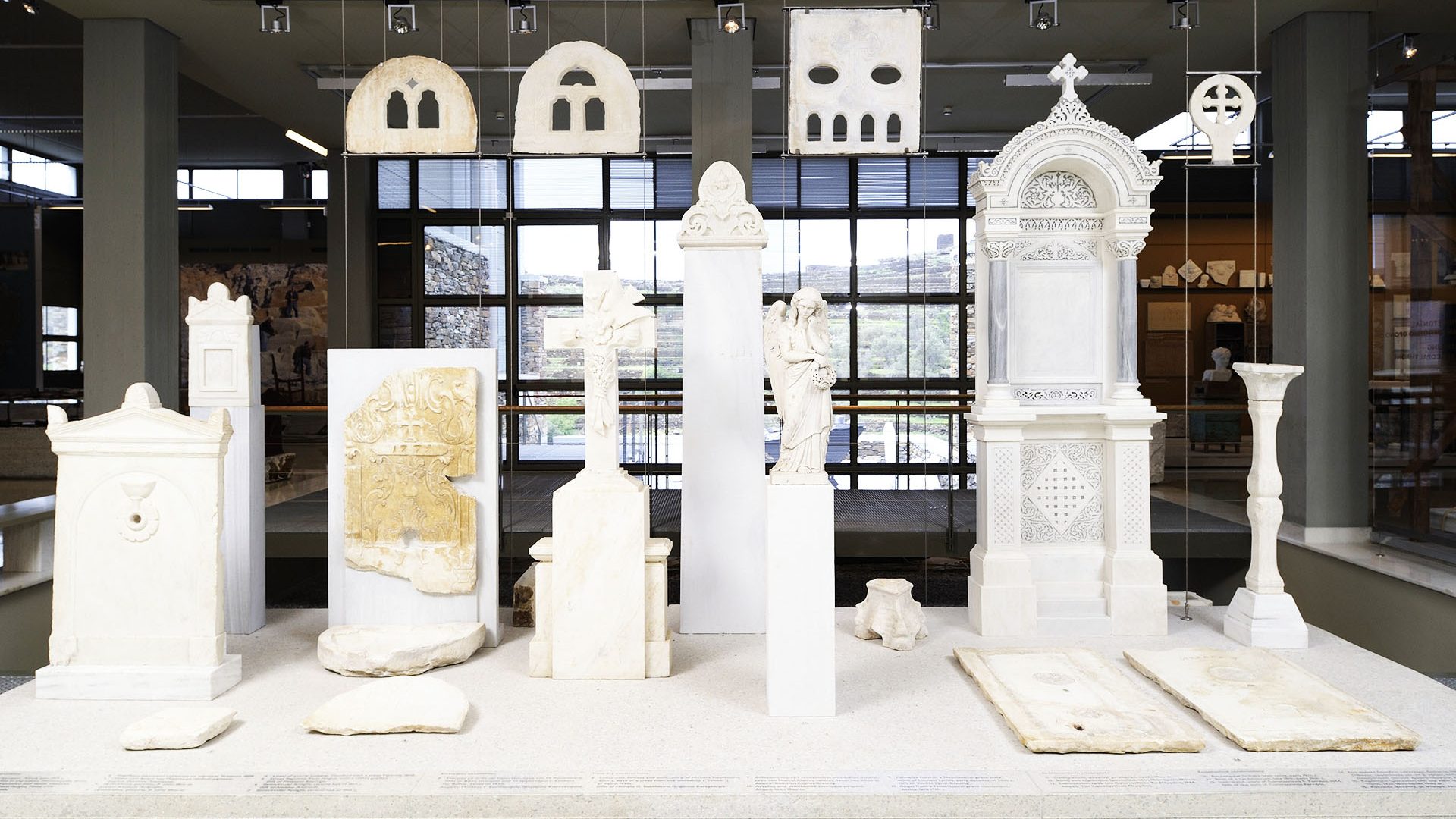 The major area of the village is tightly connected with a long tradition in marble carving and has produced many of the greatest Greek sculptors. The Panormos Artists Museum contains works by significant artists coming from Panormos such as: Y. Chalepas Filippotis, G. Vitali, L. Dukas, I. Lampaditis, L. Sochos, G. Caparias, I. Koulouris, etc.

The collection includes some 50 sculptures and reliefs.

The Fisherman, the Reaper, the Satyr, the Child, The Philosopher, Hamlet, Cain, male and female busts, funerary projects are the key themes you encounter.

In addition to the sculptures in their final form, you will be able to see up close original plaster model works with discrete points set by the artist to be transferred accurately and worked on the marble giving the final form of each work.

His clothes hanging on the hook, his personal belongings, his bedroom, his workshop, they all carry memories of the period (1902-1930) when the famous Greek sculptor lived in Pyrgos. His mind was frequently leading him into dangerous territories; Yet, without ever managing to limit his creativity.

Some of the major projects of Chalepas, sketches and photographs complement the precious material of the museum.

Museum of Marble Arts and Crafts

The Museum of Marble created by the Piraeus Bank Group Cultural Foundation (PGCF), which has the responsibility for its operation. Belonging to the network of thematic museums of the Foundation, it is the first of its kind in Greece.
The Museum of Marble Arts and Crafts presents the technology of marble, the material which has a special place in the architecture and art of Greece from antiquity to the present day, while describing in detail instrumental equipment and techniques.

At the same time, with the emphasis being given on pre-industrial and early industrial Tinos, the most important modern Greek center of marble carving, highlights the social and economic context in which local laboratories were developed.

The Preparatory Vocational School of Fine Arts of Panormos Tinos was founded in 1955 and its main goal was to teach the Art of Marble Sculpture. The School is based in the village Pyrgos in the district of Panormos in the island Tinos, Cyclades, Greece and is the special birthplace of many artists with long year tradition in Fine Arts and especially in Marble Crafting and Sculpture.

The most famous and impressive church of the island, the Holy Church of Panagia Evangelistria of Tinos, as it is officially named, was founded in 1823 at the location where the sacred Icon of the Annunciation of the Virgin Mary was miraculously discovered. This fortuitous event was taken as a divine omen for the success of the revolution that the Greeks were waging against the Ottoman occupiers. The Virgin Mary is said to have appeared three times in the sleep of Catholic nun Pelagia living at the monastery of Kechrovouni indicating the location where the icon was buried. The construction of the church took many years and is considered the first noteworthy monument of the modern Greek nation that had just won its independence.

The miraculous icon which dates back to early Christianity is kept in a specially crafted case, “iconostasis”, on the left of the main entrance surrounded by offerings and attracts the faithful from all over the world. Beneath the main church, there is the vaulted Temple of the Discovery, dedicated to Zoodochos Pigi (Life-giving spring) and commemorating where the icon was found, it also contains remnants of an early Christian church that once stood here. It is also thought that this same place was also the location of the temple of Dionysus some two thousand years ago.

The building complex which was finally completed in 1880, belongs to the Holy Foundation of Evagelistria and includes, apart from Our Lady of Tinos and the Temple of the Discovery, the Mausoleum of ELLI, an ossuary for the crew of the eponymous naval ship that was sunk at the port of Tinos in 1940 ushering Greece into World War II, the Sacristy showcasing religious silverware and goldwork, and a collection of ecclesiastical icons and other objects. The complex also houses the Museum of Tinian Artists and an Art Gallery with work of Greek and foreign painters.

Our Lady of Tinos is undoubtedly the symbolic heart of the island and a major pilgrimage site for both Orthodox Christians, who celebrate on March 25th and August 15th, and Catholics who also celebrate on August 15th as well as the first Sunday of May.

The Ursuline nunnery was founded in Loutra in 1862 by Mary-Anne Leaves, english woman originating from Constantinople. Two years after their settlement in Tinos, the four sisters had already created a school attended by twenty-four girls of the island. In 1876-1877, a great number of girls from all over the area of the East applied in order to be accepted to the School of Loutra.

The rest of the building, under the care of the Ursuline Sisters, has been transformed to museum, where visitors can admire the evidence for the tremendous work done in a period of more than one hundred years: photographs, school registers, laboratories (physics, chemistry, natural history, music, painting, sewing), the Pharmacy of the School, the infirmary, remainings of the schoolgirls hand-work and many others.

Located on the main road leading from the port to the church of Megalochari. You will find a rich collection of pottery and household items from various periods, vases of the geometric period and amphorae and large clay pots and tombstones of the 5th century, found in Exombourgo and in Cavos. Pieces of the Poseidon and Amphitriti temple are exhibited in the courtyard of the museum.

In the museum there is also a rare collection of ancient coins of Tinos on display as well as a beautiful mosaic floor found in Panagia.

A very special exhibition is that of Antonios Sochos (Ysternia 1888-1975), who was professor in the School of Fine Arts and member of the Academy of Athens. His 16 sculptures, donated by himself to the Holy Foundation in 1966, made mostly of plaster and wood, but also of clay and marble, cover the entire period of his sculpture creativeness. Combining the Greek tradition with modern European trends and drawing upon the archaic sculpture, folk art and primal abstraction, he created a personal style. From 1949 onwards he worked, almost exclusively, carving on logs of eucalyptus wood.

Find out more or adjust your settings.

This website uses cookies so that we can provide you with the best user experience possible. Cookie information is stored in your browser and performs functions such as recognising you when you return to our website and helping our team to understand which sections of the website you find most interesting and useful.

Strictly Necessary Cookie should be enabled at all times so that we can save your preferences for cookie settings.

If you disable this cookie, we will not be able to save your preferences. This means that every time you visit this website you will need to enable or disable cookies again.

This website uses Google Analytics to collect anonymous information such as the number of visitors to the site, and the most popular pages.

Please enable Strictly Necessary Cookies first so that we can save your preferences!